Dear praying Partners, With so much going on, it is hard to know exactly where to start, but I think the best place to start is with a note of praise! I finally finished the edits on the King of Glory lesson book. It actually was a much bigger job than I had thought it was going to be, but praise the Lord, it is now back in the village to get a final proof and Lord willing, we will get it back in time so I can get it to the guy who is going to do the formatting for the publisher. Much prayer is still needed. Our prayer is that the Lord would really use this book as they, the Yanomamö start taking more of the responsibility in reaching their own people.

When we returned to the USA, I thought I could finish getting it to the publisher in a matter of weeks, now two months later, we are finally seeing the finish line. Let me show you a few pictures to show you the reason it took so much longer than anticipated. 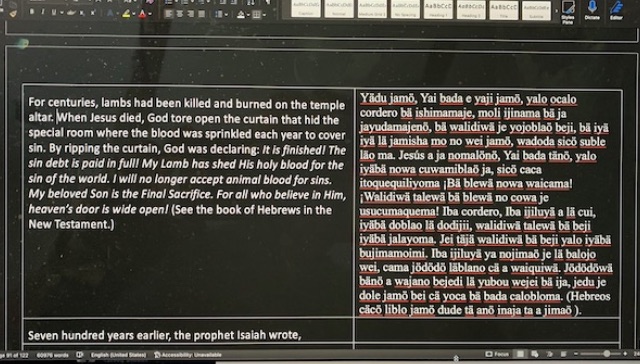 In this first picture, you can see how much too long the Yanomamö is compared to English. In order for the book to print right, the other language has to fit in the same space as English. English hs 9 lines of text and Yanomamö has 16. That is a lot of cutting. So in the second picture you can see what it looks like edited down. The hard part is keeping the meaning while saying it in much fewer lines, and that is harder than it looks, but in the end, I think we are going to have a much more readable book for our Bible teachers to use teaching their own people. To be honest, It was a hard job, But I really think it is going to be so worth all it has taken and will continue to take to get this in hands of our outreach teams as they began to take on more and more of the responsibilities of reaching their own people. Pray that we would continue to have wisdom and strength to finish this job. Also pray about the cost of the printing. This first time, we might just do a print on demand, perhaps a few hundred copies and then, later doing a larger printing, either way, we covet your prayers.

I think this letter is just going to be a Praise Letter, as another huge praise is, I have mentioned to some of you all, that a delegation of Yecuana Natives had come up to Cosh to ask us to help them get their New Testament on audio. I explained that we had never done that and had no idea what all it involved. I did tell them that we would check on it and see what all was involved. Well, to make a long story short, we did find out and to be honest, it was way above anything we had the resources or the time for, until during our annual Venezuelan MK reunion up here, we were talking about the Yecuana, as most of the MKs know the tribe well. I mentioned they were asking us for help with this project and one of the MKs said, you have to come to Orlando and meet some of the guys I work with at Wycliffe, that is what they do. Again, long story short, we did and were absolutely blown away. They demonstrated the old way of doing it, which I was already seeing, for us was impossible, but then, they showed us their new software, and WOW, just Wow! So a huge praise, not only did Wycliffe make their software available to us, they are giving us lessons via zoom on how to use it, etc…So praise the Lord with us. We are in the process of getting the necessary recording equipment to take back down with us. Again, your prayers are so coveted.

Last praise, only because the letter is getting too long. We now have 2000 messengers and 500 Torches en route to the jungle. The Messengers are already in Caracas and the Torches just got to Miami. Lord willing, we will take these up to the jungle with us when we head back up in January. We decided to do 100 of the Torches with lessons in the Yecuana language. These 100 torches will also have the entire Bible in Spanish and also Lessons in Spanish. One day soon, we hope to be able to start placing torches with this tribe with their own New Testament on it as well. Thanks for your continued prayers and partnership in this amazing project.

I don’t know if I shared this story or not, but on one of our trips in a very far away village, a woman asked us for a torch. I knew she was the wife of one the village witchdoctors. We did give her one of the torches. Months later, we were back in that village and the lady’s husband asked for one. We normally only give one to a family as there are way more Yanomamö than torches and we want to place them in as many villages as possible. I explained this to him but he became quite insistent on him getting one. Finally, I asked him, “Why do you want one?” inferring almost, that since he was a witchdoctor, why would he want one. I figured he would say, “well, when I get up at night, the flashlight is so handy…” but he did not. He looked around, lowered his voice and told me. “When I borrow my wife’s and play it at night, with it on my chest, the demons don’t bother me and I sleep so good listening to it, but my wife keeps taking it away from me as she wants to listen to it herself. I really need my own.” We gave him one.

The first months after getting back to the jungle we are going to spend time going to all the villages where we have placed torches and do a follow up on them, Do they have any questions? are they understanding what they are hearing? how are the torches holding up? etc.

Again, thanks so much for all who have given and prayed for this project. God’s Word will never return void, this is HIS promise. Exciting days!