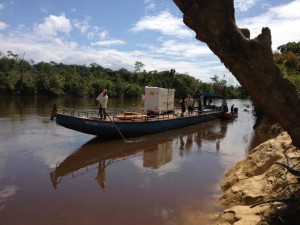 The need for our own air support, especially with an aircraft
stationed right here in the jungle is brought home once again! My
nephew Shawn fell and broke his arm today at 3:30 PM. There is not
time to have an airplane round trip from town up to Las Esmeralda and
back out to town before night and no night flying is allowed in the
jungle, so the poor boy has to wait here until morning. We will leave
at first light by boat down to the government strip at Las Esmeralda
and wait for the plane there. He will then have the two hour trip out
by plane to the hospital. He is in a lot of pain. It is a really bad
compound fracture right above his left wrist. If our airstrips were
not closed, and we had our own air program flying, he could have left
here as late as 4 pm and still made it out to town. Prayers are
appreciated for him.

Prayers appreciated for the country of Venezuela. President Hugo
Chavez Frias died on the 5th of March at 4:25 PM. Pray for peace as
the country goes through this transition. There is much uncertainty.
Please use discretion when forwarding things to my email and posting
things on my Facebook wall. We strive to be as wise as serpents and
yet as harmless as doves in this murky political reality of today. The
country has called for new presidential elections on the 14th of
April. Pray much for this country!

Last week and into this week Mia was sick and we believe she had a bad
case of dengue fever. She is much better now and we are having a hard
time making her stay down as we do not want her to relapse. We are
grateful she is over the hump with this. For a few days, we were very
concerned for her.

On the 6th of December, our generator “kicked the bucket” as it were.
It had been giving us trouble for the last two years but we had hoped
we could keep it running a bit longer. But it died and refused to
start in spite of all we tried. But now, we are praising the Lord for
a good friend who donated the funds needed to get a new generator. It
took us awhile to find one here in Venezuela, but we were finally
successful and purchased it.

It was coming from Caracas on the 13th and it arrived at the port in Samariapo on
the 14th of February but due to red tape, did not leave for up river
until the 21st of Feb. We were wondering if it were ever going to get
released. But in spite of many obstacles, it made it’s way up river
and arrived in Las Esmeralda on the 24th. We had to change boats
there, but the switch was made without incident and we started on the
way to Cosh on the 25th. The generator arrived in Cosh on the 26th and
we were able to get it unloaded on the 27th. It was a huge job and we
are happy to report that our generator is running and it is great to
once again have power. Sad to say, I am afraid we have all gotten a
little spoiled. It was hard to do without our generator, but we are
grateful for it and praise our God for this beautiful gift!

We are honored to be partnering with you all in this great job of
bringing the good news of Jesus Christ to the Yanomamö. While there
are many issues politically that keep us on edge, God continues to
bless the work and we have had a number of people make public
professions of faith in the finished work of Christ since the new
year. God is good! Thanks for your part in this!